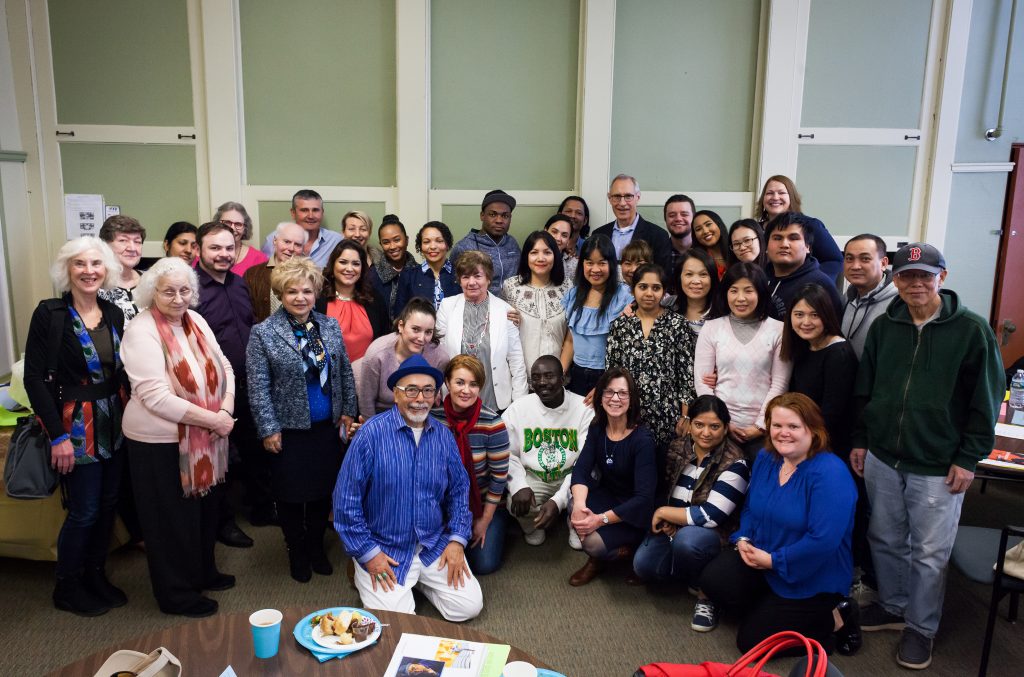 This is a version of an article I wrote for New Hampshire Humanities about the day the Council hosted Juan Felipe Herrera at the Nashua, NH Adult Learning Center.  Thank you Maren Tirabassi and the students of the class and Juan Felipe for their lines of poetry I include.

A Story from the House of Extravagant Colors

Maren has been preparing the Adult Learning Center’s level 5 and 6 classes before the 21st Poet Laureate of the United States comes to visit. They are Rohingyas from Burma, Congolese, Colombian, Salvadoran, Haitian, Serbian Indian, Chinese. They have cooked for Juan Felipe Herrera. Their classroom smells of deep fried pakoras, red yam balls with butter and cream, rich chocolate.

They’ve written a welcome poem and when Juan Felipe arrives, they invite him to sit and a chorus of thirty-five international students read to him:

Welcome to our house of extravagant colors

in our classroom on Lake Street

which is for all of us a place of pause

on the road of our lives.

Juan Felipe has been traveling the country as poet laureate and has met many classes of new Americans. He has written poems about many of their countries. Senegal Taxi is a series of poems in which children from Darfur imagine escape ultimately to New York City. In it is “Mud Drawing #5. Abdullah, the Village Boy with One Eye,” which begins,

No mother. No father. One brother. One sister. No food. No water. No

cows. No camels. No trees. No village. No food no water. No cows…

But that’s not why he came. Juan pulls out his harmonica. He begins a repeat-after-me song and all the voices in the room chant with him in their adopted language English. He’s written a poem for them with the lines: I am your sister/ I am your brother/ Remember me. Dayanara is too shy to read a poem she wrote after reading Juan Felipe’s Calling the Doves, but Maren reads it.

Born in a big city

but destiny sent me rural bound.

Downtown was all there was.

Juan Felipe writes downtown on the board. This is impromptu.

He writes many of their words on the board. Dove, breath of happiness, love, wisdom. The words become the refrain between his stories.

Everyone sings their repeat-after-me song.

We are the song

We are the dove

We take off flying

You raise me up.

One of the students asks: what is your advice for us?

“Bring your families into your stories so others in the community can meet them,” he says. “I wrote about my parents so you could meet them. I grew up in migrant worker camps. When I heard my father speak, it was like poetry.”

He proclaims the students are poets. “Your voice,” he says, “is the natural and beautiful voice that everyone has.”

They break to eat the foods of the world they’ve prepared for him and present him with a framed copy of their welcome poem. The second to last verse:

So – to the poet of our new country

whose voice is beautiful

and whose tongue is not a rock,

and to those who have brought him here, welcome!

Everyone gathers for a group photo.

“That is why I came,” Juan Felipe tells them, “to say you have a beautiful voice.”