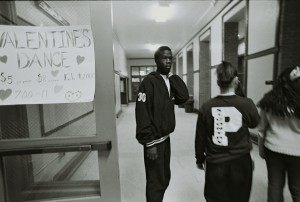 “When Studs Terkel was asked on Transom what he wanted to hear on the radio, he answered, “Something real.”   Jay Allison in his intro to this story on Transom.org, “If You Were Thomas’s White Girlfriend.”

Thomas got a job shelving books at a branch of the Portland Public Library, a pretty good job considering that he hadn’t been in the country all that long.

But long enough to have some problems with white girls.

He might tell you some stories, and if he did, you might begin to have an idea of how it would be for a white girl if she was Thomas’s girlfriend.    What if you were his white girlfriend?

You still might be his girlfriend because he will talk to you freely about everything.  He loves Portland High School. Maybe it never occurred to you to love a school the way Thomas loves it.  He walks down the halls with something like joy across his cheekbones and sliding up into his dark eyes.  He’ll say,  “Here you can meet any kind of people that you like to meet.  You can go with whatever group you want to go into.”

If he went home with you to meet your mom and dad, he would be formal with them.  He would shake their hands.  If they asked about Sudan, he would try to explain,  “In Boston are what they call Lost Boy. Boys as small as four are abandoned when their parents are killed or they are separated in the shelling of their homes.  You can see this on the Disney channel.  Maybe you can put on some time.”

Thomas likes soccer.  You’d spend a lot of time at the soccer field over by the Hannaford supermarket at the end of the Marginal Way, the walk around Portland’s edges.

If you were Thomas’s girlfriend, he might want you to have African braids and you’d sometimes listen to Koffi Olomide. Koffi’s Congolese drums would thunder through the car, if you got one, when you’re driving through the Old Port.

If you brought over a layer cake, with lovely, gloppy chocolate icing between the layers and on the top, Thomas and his brother would love it, and you could work your way into the family when his mom isn’t there.

If you were Thomas’s girlfriend, you would pretty soon pick up on the African saying, “In Africa, you are never late.”

Thomas has a different idea about time than you do.  Sometimes Thomas doesn’t show up.  Sometimes he comes one or two hours late. He will be very polite and he will recognize that you think he is late and he will apologize, and you can get angry but you’d have to stay angry because Thomas will always pine for the unscheduled time of Africa and it just won’t do any good to rage.

If you were Thomas’s white girlfriend, you would have to pick where you were going to eat your lunch at the high school, in the lower caf with the natives, or the upper car with the immigrants.  This is not an arrangement that the school likes.  The principal wanted to fix this segregated eating right away when he came to Portland High.  But nobody was in favor of that.  Students said that they were eating with their friends and they like it that way.  So that’s how it stays. Maybe you could cross over.  Maybe Thomas could.  That happens. Also, sometimes a kid will try to get something going in the hall.  Thomas likes to “go friendly” with people.  That is one of the reasons you want to be his girlfriend.  He says he doesn’t care if they are Muslim or black or white.  He would like to go friendly with them.  Thomas is patient, but if a kid won’t let up he’ll say, “I’ll fight you.” And you could be the trigger.

If you were Thomas’s girlfriend, you might see a Sudanese mom try to keep her son from a white girl. She would say, “In Sudan our children do not have boyfriend or girlfriend.  And here I see the white girls have no shame. One time a girl came and kissed my son on the mouth.  I said, please, please do not do this, I have younger children here who can see.” Thomas explains this behavior disrespects the family. The family will lose its dignity.

His family would ask you to explain many things.  Why do you go to school in the winter instead of the summer? It is much easier in the summer. Or, how do you send  your friends money when they call with a problem? Or, why, here, do the parents respect the children instead of the children respect the parents? Why is it with you Americans, you are so busy all the time. Why don’t you talk to each other?

There’s a chance you could go down the highway to Old Orchard Beach together where sometimes white girls hang with African boys.  Old Orchard is a wild mix of beach Americana and signs that say Nous Sommes-Francais to invite French Canadians, and beyond the motels and shops is the fierce ocean. His mom probably would never go there.  An African boy could walk with a white girl here on 5th Street, the street with vendors selling tattoos, orange creamsicles, and Caribbean hair wraps. Here, you could laugh together, and maybe Thomas could take your hand.

For background and audio to the story go to Trasnsom.org: A Showcase & Workshop for New Public Radio  http://transom.org/?p=4656