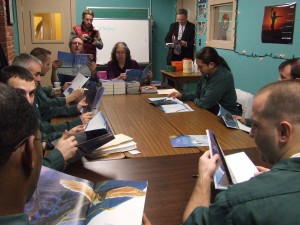 “Like I want to rush my sentence.  I feel like I’m missing out with my baby.  But it seems like six months has gone so fast for her.  You want to take in every last breath you can take, and make them last.”

On a wall at the Concord State Prison Family Connections Center is a poster with the message,  “Be a dad. Be there.”   Around the table eight inmates join Connections facilitator Sara Backer.  To be at this table the men have met certain requirements. They are all dads, including step-dads.   They have attended communication classes and weekly parenting education classes to earn the privilege of attending the New Hampshire Humanities Council discussion.  These men are among the growing number of incarcerated parents in the U.S. The Pew Center on the States reports findings of a national study that 2.7 million children (1 in 28) have parents who are incarcerated, up from 1 in 125 twenty-five years ago.

“I continue to parent the best way I can,” Kevin, one participant, says.

Marquis, a tall, articulate man, said when he was two, his father was murdered.  He was determined to be there for his own child, even from prison.

Chad, who is reflective and the spokesman others sometimes turn to, says, “We are all dads who want to be better dads to our children.”

Mary Kelley, program coordinator for the NH Department of Corrections Family Connections Center says they offer many programs to help inmates learn parenting skills and maintain their role as parents.  The FCC brings Connections book discussions, featuring children’s books and poetry, as a further opportunity to build these ties. Word spread from Concord to Berlin that men valued  the Connections reading club as a way to continue their learning and connect with their kids.   Concord, Berlin, and Goffstown have all hosted the reading program.

Three of the men have met Sara in a previous series and understand what they are going to do.  The rest are there on faith.

Sara passes out the first book, a picture book, Owl Moon by Jane Yolen.  John Schoenherr’s illustration’s capture a deep New England wood in moonlight and shadow.  Sara reads the first page.  Everyone at the table reads a page. They read about a stark winter night when a child and father go owling.

If you go owling

You have to be quiet

And make your own heat.

Chad wishes he got a page without the owl call, but he reads,

Pa almost smiled. Then he called back:

just as if he

were talking about supper

or about the woods

“My nine-year old,” said Kevin whose hair is coming on white, “he’d like the dark woods, a son and dad alone walking, something he hasn’t seen in a long time.”

Each man makes the unnamed and bundled child in the book the gender of his own child.  “It’s a poetic moment,” Chad says, “A child and father in a great landscape.”

Jonathan says, “I couldn’t even imagine the things my daughter and I are going to do.  We might just look at squirrel footprints in the snow.” Jonathan is twenty-three. His daughter, Leila, is six months old.

Michael and his son already know this book. He says, “When I get out, my son wants to go owling.” He laughs. “We don’t have any owls where we live, but we can go look.”

The theme of the series of discussions is “How to See,” a name taken from Philip Booth’s poem, “How to See Deer,” with the lines  “in deep relief/ things even out. Be/ careless of nothing. See/ what you see.”  In a previous discussion, men had spent an hour on that poem and adjusted to seeing it from each of their different perspectives. They’ve become skilled in listening and curious to hear conflicting interpretations that have their own sense.

In this series Sara continues the exploration of ways of seeing a poem – and one’s life – this time beginning with a picture book and visual discoveries in Schoenherr’s illustrations beside Yolen’s narrative poem.

They talk about why their kids might see some details that older, more experienced eyes might not see.  “Maybe if it’s not new, we learn not to pay attention,” Sara says and suggests this is the way to read poetry, with eyes open to new ways of seeing.

They read a prose poem in Garrison Keillor’s anthology, Good Poems, called “The Life of a Day” by Tom Hennen.  This is the line that seems to sit in the middle of the table, the arresting line:

“For some reason we like to see days pass, even though most of us claim

we don’t want to reach our last one for a long time.”

Jonathan says, “Like I want to rush my sentence.  I feel like I’m missing out with my baby.  But it seems like six months has gone so fast for her.  You want to take in every last breath you can take, and make them last.”

The time is moving quickly.  The men are aware of the clock beside the poster and when they’ll have to move on from this table.

But for now, Sara offers a final poem.  It’s Ray Carver’s “At Least.”  Carver lists many things that he wants. He ends in this way,  “I want to get up early one more morning, at least./ And go to my place with some coffee and wait./ Just wait, to see what’s going to happen.”

She invites the men to write a poem using “At Least” as a model,  “as if you have your hand on Ray’s hand” and you can follow that form.

Their poems are about their kids.  Kevin also writes, “I want to walk down a road.  I don’t mind getting lost.”

A reporter is here and the men go around and tell him their name, offence, and sentence in the same open way they talked about the owl.  Sara gives homework for the next session.  Read the next book, Woodsong. Gary Paulsen. “And bring your poetry book.  You never know when you’re going to need a poem.”

Reprinted from the Newsletter of the New Hampshire Humanities Council, December 2010.