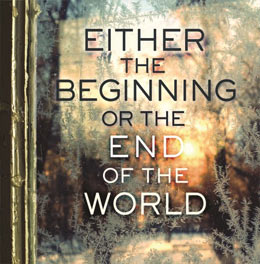 Soksreinith Ten (call her Nith, she told me) , a reporter with Voice of America just interviewed me for their English and Khmer News Service about Either the Beginning or the End of the World. She asked, in a few words tell me what your novel is about. I said it’s about a mother and daughter. They love each other but they can’t tolerate each other easily. “I thought by 16 I’d be over her,” my character says. The mom is a survivor of the Khmer Rouge regime. Then Nith and I had this extraordinary conversation about her mom, also a survivor, and they have the same “hard love” as I write about. I was greatly relieved and honored that Nith found the story honest and true.

Nith  wants to tell her mom’s story; her mom has never talked about the war, “the tears just pour out,” the young reporter said. She sent me a poem she wrote about her mom.

Our  trailer for Either the Beginning or the End, created by Kornnita Chen, Sophia Sturtuvant,  Fred Okot Ben, James Muller and Kirsten Cappy  with music by Bochan is linked to in the Khmer edition of Nith’s story and was played for 15 million Cambodians.   Here’s the Khmer Edition.

Here’s a link to the English Edition.  The world, again, seems very small.