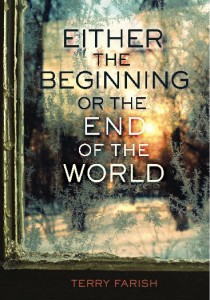 New Hampshire Humanities writes: For fourteen years, America has been mired in war, war being waged by less than one percent of the population. The relatively small number of active military service members has widened a cultural gulf between the military and civilian sectors. Enter the humanities!

It’s an honor to work with Leslie Pasternak who’ll lead the discussion of Either the Beginning or the End of the World and pose questions to me and readers.  Leslie  is the director of Kate Wenner’s  Make Sure It’s Me, a play on the subject of traumatic brain injury among returned service members.    With veteran actors, Leslie has presented the play in libraries and on the stage.  She also takes the play to Vet Centers where veterans participate in the presentation.  It is an extraordinary play that has brought veterans, their families, and communities together to talk, to understand, and to build paths toward healing from traumatic brain injury.  I am honored  that Leslie has championed my book as a way to add to the discussion of soldiers coming home. We’ll be at the Hampstead Library, Hampstead, NH  on Oct. 27 at 7 p.m.