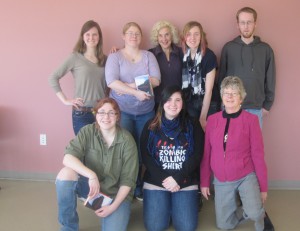 Prof. Cathy Eaton, me, and a few of her former Intro to Literature students. They’re also writers themselves.

Students and teachers have shared with me some of the essays written in response to reading The Good Braider. One student, Steven Kidder, wrote an essay about PTSD. It was both well researched and also deeply personal, and his personal response added power to the facts about PTSD. In Viola he saw a person experiencing flashbacks to terror during the war in Juba in the same way his brother-in-law experienced flashbacks. His brother-in-law had returned home from two tours in Afghanistan. Steven writes that his brother-in-law “avoids large crowds of people, because it causes him to feel anxious and uncomfortable. He immediately feels he is at risk in those situations, so he avoids them at all costs. This occurs for Viola when Jamal runs off and is picked up by a couple of men. As opposed to thinking that they are going to simply return him she thinks they are going to attack her like the soldiers did…Even after she recognizes one of them as her classmate Andrew, she can’t escape that feeling of impending terror …” Steven wrote the essay for Cathy’s Eaton’s Introduction to Literature class. Prof. Eaton’s assignments seem to honor both her students’ life experiences (she explains that a number of her students are veterans themselves) and their diversity of cultures. Steven taught me new facets of the struggle with PTSD. He ends his essay with a call to action: “Though there are preliminary studies being done to see the effectiveness of interpersonal psychotherapy and mindfulness in coping with PTSD, there’s still a lot of work to do. We must work together to make sure these stories are heard and that all the Violas in the world know that they and their stories are very important.” Thank you, Steven.