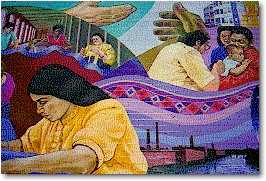 Lawrence, Massachusetts is a city of murals.  A “Bread and Roses” mural is on the Lawrence Family Health Center building.  Students create murals in the alleyways.   Next year, Carolrhoda Books will publish my picture book  LUIS PAINTS THE WORLD set in this city. It’s a story of going away to war from the eyes of a child whose brother is deployed.  As the seasons pass through the deployment, the little brother, Luis, paints on the alleyway wall the story of home and the mural grows with his and his brother’s changing lives. 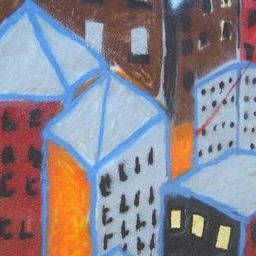 Detail of Lawrence students’ mural painted in 2005. The students wrote, “The city where immigrants become giants.”

Here’s the publisher’s description written by Anna Cavallo at Carolrhoda Books:  “Nico doesn’t have to join the Army to see the world—that’s what younger brother Luis tries to show by painting a mural in the neighborhood alley. But in Nico’s absence, Luis’s world expands along with the mural as family and neighbors add to it. As seasons pass, Luis nervously awaits his brother’s homecoming.”