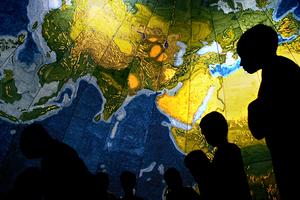 I gave a talk to students who are studying to become teachers at the University of Maine in Farmington at their annual Diversity Conference.  At the same time, the New England Geographical Society  was meeting on campus.  And a part of that conference was a 20-foot inflatable balloon, hand-painted to look like a globe, and set up in the university gym.  It happened that the talk I gave had the title, Center of the World. I’ve been fascinated by the Buddhist idea that wherever we are, anywhere in the world, we are in the center.  Wherever we walk, everybody is walking in their own sacred space.  Of course where I was going with that is that, through books, we can begin to imagine  the world’s of others.  I found this to be the most wonderful syncronicity that I could walk down the windblown, golden streets of Farmington to the  gym and  see  this world, called EarthView, a creation of Bridgewater State University.  This photograph is by Jacob Belcher and it appears in the Bridgewater Independent.  He captures the vivid colors of the gorgeously painted earth and the silhouettes of students who have climbed inside Earthview.  “It’s a globalized world,”  the newspaper quotes Bridgewater geography professor Vernon Domingo. Here was a grand way to experience it.   Soon I’ll post my  talk, Center of the World,