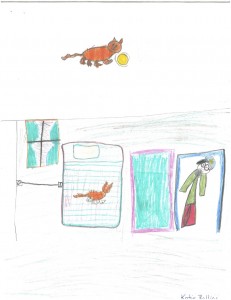 A child from Pittsfield, NH retells the story of The Cat Who Liked Potato Soup.

I have enjoyed Christmas class visits.  I went to New Durham School in New Hampshire and met all the children, grades 1 -6.  They are very fun to puzzle out with about what’s really going on in THE CAT WHO LIKED POTATO SOUP.  The children are savvy. They see the truth about the old man who in the story claims to have no affection for his old cat. He complains about her. He calls her a “worthless cat. Never caught nothin’ Not a mouse, nothin’.”  But the children read between the lines. They see the old man let her sleep on his electric blanket and  he takes her bowls of potato soup.  And they see the cat not willing to accept the man’s careless words. I ask the children, “Does the old man like his cat?” They look at the clues. “Does he miss the cat?” I ask, after the cat disappears and the old man is alone.  They see a box of Kleenex on the table while the old man holds a spoon but cannot eat. “He’s sad,” the children say.  “He does like her.”  I only read parts of the book in the assembly program I did at the school. After the assembly, a teacher took a copy of the book and read to her class. She told me later, “They got it.  The children understood.  They were able to  see who the man really was.”