“Braiding the Verse Novel”  is a series of interviews I did with writers of novels –  and one biography  – in verse.  We had our conversations over the summer of 2012. I’ve written articles about verse novels for School Library Journal and NH Writer which draw on these conversations in different ways.  Here, I’m posting the full responses from each of the writers who allowed me to ask them questions. 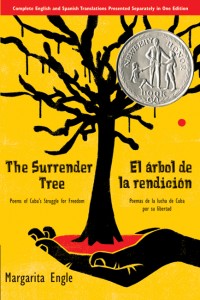 Margarita Engle is the Cuban-American author of The Surrender Tree, recipient of the first Newbery Honor granted to a Latino writer.  Her other young adult novels in verse include The Poet Slave of Cuba, Tropical Secrets, The Firefly Letters, Hurricane Dancers, and The Wild Book.  The Lightning Dreamer is forthcoming from Harcourt in March, 2013.  Engle has received two Pura Belpré Awards, two Pura Belpré Honors, three Américas Awards, an International Reading Association Award, and the Jane Addams Award. She lives in central California, where she enjoys helping her husband with his volunteer work for wilderness search and rescue dog training programs.  Her next picture book is When You Wander, a Search and Rescue Dog Story, forthcoming from Holt in March, 2013.

Terry: Would you select a few lines from your novel and tell about a choice you made in the craft of those lines?  How did you shape them to achieve something key to the story?  (This is a wide open question.  Maybe you used or created a formal structure and would describe that. Maybe rhythm was key to you. I look forward to hearing wherever this question takes you.)

Margarita: Writing a historical novel in verse is a process of exploration.  In the opening poem of The Surrender Tree, I imagined what it would feel like to be a young, enslaved, self-taught wilderness nurse, whose gift of healing is misunderstood as something dangerous and malevolent. In the voice of Rosa la Bayamesa, I explored her point of view:

Some people call me a child-witch,

but I’m just a girl who likes to watch

the hands of the women

as they gather wild herbs and flowers

to heal the sick.

I am learning the names of the cures

and how much to use,

and which part of the plant,

a bee, feared by all, even though the wild bees

of these mountains in Cuba

are stingless, harmless, the source

of nothing but sweet, golden food.

I imagine only a Cuban would notice that the part of this poem that refers to the names of cures is an echo of one of José Martí’s Versos Sencillos (Simple Verses) about finding comfort in knowing the names of wildflowers.  However, I believe that everything else in this poem is universal. All young people experience times when they feel misunderstood. Nature, healing, and hope are also aspects of life shared by all cultures, and all ages.  Rosa la Bayamesa healed soldiers from both sides during thirty years of warfare, so I knew I had to carry her character into adulthood.  I also knew that later in the book, there would be a scene with children saving her hideout by placing beehives in the path of enemy soldiers.  It was an incident I had read about, one too important to omit, but I can’t say that I consciously used the bees in this first poem to foreshadow the later scene.  I spent so much time immersing myself in the research that real events floated around in my head, searching for places to land. Throughout the imaginary thoughts in this novel, documented historical events wove themselves into the poems.

Terry:  Can you draw a parallel between your use of poems to create the novel and cultural or literary traditions of the community represented in the novel?

Margarita: Poetry and music play such an essential role in Cuban culture that it was natural to include them.  Since the book was really about people like Rosa, who did not leave a diary or any written record of her life, I made only brief references to the most beloved poet of those times.  José Martí is the “father” of Cuba’s independence from Spain, but his martyrdom in the “Spanish-American War” is so well-known that I only mentioned his poetry in passing. Instead, in a series of poems beginning on page 106, I let the voice of a young refugee girl named Silvia speak about natural sounds, along with the birdcalls of Mambí rebels, who communicated while in hiding, using the Canary Island tradition of a language of whistles:

of a waterfall, my own tumbling, exhausted,

Next, on page 107, the voice of Rosa’s husband, José, speaks about music:

inside my mind, to keep myself awake.

Then, on page 108, Silvia marvels at the power of song:

Does the old man in the forest

know that he sings in his sleep?

And finally, on page 109, Rosa turns to non-verbal communication with young Silvia:

I see a story in her eyes.

She thinks she has no right to eat

while so many others starve.

If I had to describe the rhythm of these poems, I would say there is a hoofbeat.  Like so many of Cuba’s improvisational “country music,” songs from this era were sung on horseback.  I picture an easy lope, the kind of pace that a horseman would use to cover great distances without tiring his faithful mount.

Terry:  Would you suggest that there is a kind of story that is best suited to the verse novel form?  Tell me your thoughts.

Margarita: I would like to think that any sort of story could be told in the novel in verse form, but that might only be true of the kinds of stories that interest me.  I don’t enjoy the distance of an omniscient third person narrator.  I love to plunge straight into the heart of the story’s events and emotions, using thoughts and feelings rather than long descriptions and dialogue.  At the same time, I do enjoy the visual aspects of a story, so I use what I know about nature and the five senses.  The Surrender Tree is set in tropical rain forests and caves.  Sounds, sights, fragrance, stench, all of it has to be included, so that both the author and reader can time travel back to a remote Cuban jungle where former masters and former slaves fought side by side, for the shared goal of independence from Spain, followed by peace, the greatest treasure.