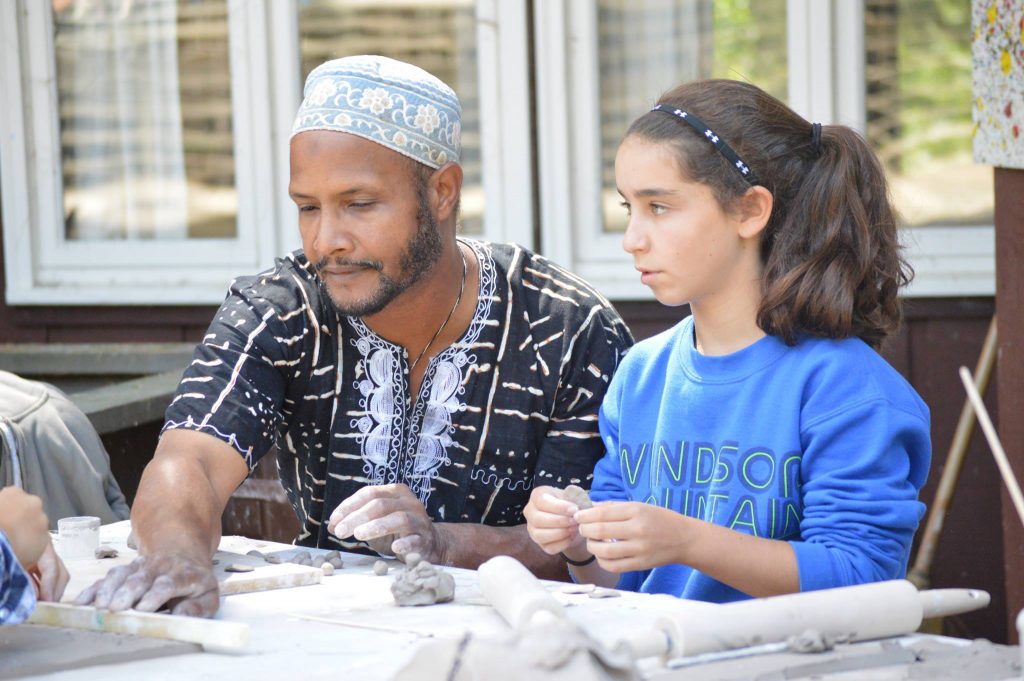 Ahmad is a potter who lives in Concord, New Hampshire.  Ahmad worked as a potter for many years in Athens, Georgia. He became a Muslim in his youth and uses the art of Islamic calligraphy to adorn many of his pots. He married to a young woman from Burma. She fles as a refugee Muslim Rohingha in this predominantly Buddhist country.
Ahmad and I met to talk at Windsor Mountain International School in Windsor, NH where he teaches pottery to children from all over the world.

Ahmad said, “I’ve honed my teaching skills since I became a potter. I’ve been a potter and worked with children most of my life. My grandfather was a taylor and he showed me how to sew a button when I was a small boy and I became used to working with my hands.
“I never planned to be a potter,” Ahmad said. It came to him naturally as his grandfather’s grandson.  He set up his studio near 441, a term he uses for all the potters that have traditionally worked along Rt. 441 in Georgia.  Here, he met people in the ancestral line of Dave the Potter, a very skilled enslaved potter whose pots were much in demand in the 19th century.
Ahmad referenced an article about him and his work in Georgia by Susan Harper in the region where he began his studio called Rainmaker Pottery. The name draws on Ahmad’s Native American heritage.
Ahmad made vases, bowls, cups, tea sets using the process of oxidation firing.

Sometime later he journeyed to Senegal and taught ESOL in a school. While he was there,
he visited a village called Thidaye a distance from the capital city Dakar .  He said, there he learned to   throw pots in new ways. With the potters there he “learned their style of making coiled pots and pit firing, and using a cob oven. The clay was from the ground. In the rainy season, it makes a black clay. If you dig down deep you find a kaolin bed.” The kaolin is used as the grit – the sand – in the clay.  The women in Thidaye used iron oxide which Ahmad says is like meteorite dust.  They painted their pots with symmetrical lines. They fired the pots in a fire burning hot with millet husks, wood, and cow dung.
“I learned all this,” Ahmad said.

Later  he went to Turkey and studied and painted Arabic calligraphy on his pots. He describes the calligraphy: “It resembles Islamic floral art with bright glazes.” He said, “I’ve always admired Turkish pottery.  Earlier this year he was in Morocco studying Islamic calligraphy. He also made tagines, clay cookware used for making Moroccan dishes.

Ahmad’s pottery workshops are among the most popular activities for this camp with the children who range in age from seven to teenagers and are from Russia, Turkey, Indonesia, China, Honduras, France, Ireland, the U.S. and many more countries.

In mixed aged groups, they work together with Ahmad. He said he has used 1500 pounds of clay with the children and teens this summer. Ahmad teaches them techniques he learned in Georgia and in the many countries he has traveled to. His studio is bright with the work of his students where he praises their creations. He brings in skills that his individual students offer the class, using such things as the Chinese calligraphy known to his Chinese students. A line of text composed in calligraphy on his wall is translated from a poem Ahmad wrote. Here are the lines in English: “Serenity, please dance with me.” He clearly values teaching as well as his students, and his students make beautiful work with him.

Ahmad said  “‘Children and clay have something in common. They are both very impressionable’. I teach the children at Windsor Mountain International Camp at the beginning of the first lesson that “every time they touch the clay they change it.”

“Art bring souls together. Through the years children at the camp would just come to play in the clay and talk about life. It has been that way for me since I embraced ceramics as my medium of artistic expression over 25 years ago. The way I have been teaching children throughout the years and my time at the international camp, has been inspired by a Sufi saying, ‘Children become what they behold’. Let them behold love, kindness and beauty.”