I met illustrator Nickie Tadgell at a We Need Diverse Books event at Annie’s Book Swap in Worcester, Massachusetts. Nickie is the illustrator of many books including the beautiful FATUMA’S NEW CLOTH by Leslie Builion.  Nickie’s just illustrated a new book, REAL SISTERS PRETEND by Megan Dowd Lambert, the story of a mixed race family with two adopted daughters of different races. The sisters aren’t described in the text. The story is told in dialogue. One illustration in particular held so much emotion and it led me to want to understand how these characters came to be and Nickie’s process to seeing them. She answered a lot of questions I asked her and here’s her artist story.  (Illustrations 1 and 4  in this post are drafts of that illustration I found so tender.)

Terry: How did the premise of the book guide you when you began work on it?

Nickie: I was delighted when I got this assignment! Finally, a book featuring children of color where it had nothing to do with race – present day, not historical. A refreshing change. I grew up with two sisters and a brother, so I know what it means to be both a big sister and a little sister.

Terry: What text or author’s note did you get from the author, Megan Dowd Lambert, to suggest to you what the sisters look like?

Nickie: Megan described her daughters as a possible suggestion – at first I was thinking of having Mia as Southeast Asian, until I rediscovered photos I took for a different book that were never used. And this child was a similar ethnicity as Meghan’s younger daughter and also an adopted child. Couldn’t be more perfect!

Terry: Would you describe what they look like in your book?

Nickie: Tayja is about 8, African-American, with beautiful dark skin & eyes, a soft crown of hair, and fun purple eyeglasses. Mia is tiny and slim, about 4, Latino ethnicity, with a mop of curls and hazel-green eyes. Because I was using photo references for Mia, the process was simple. Tayja was harder – she was a combination of photos from the model I used in My Cancer Days, plus my imagination.

Terry: Did you have a sketch book and make character studies? How does that work?  When do you know you’ve got it?

Nickie: Yes!  I have several sizes of sketchbooks and try to keep a small moleskin in my purse for sketching. Sometimes when I’m in a waiting room I’ll draw on whatever paper I have – in this case (character study 1). Sometimes I know it works right away, sometimes I just run out of time. If I had no deadlines, I’d probably still be working on my first book. Nothing is ever perfect. 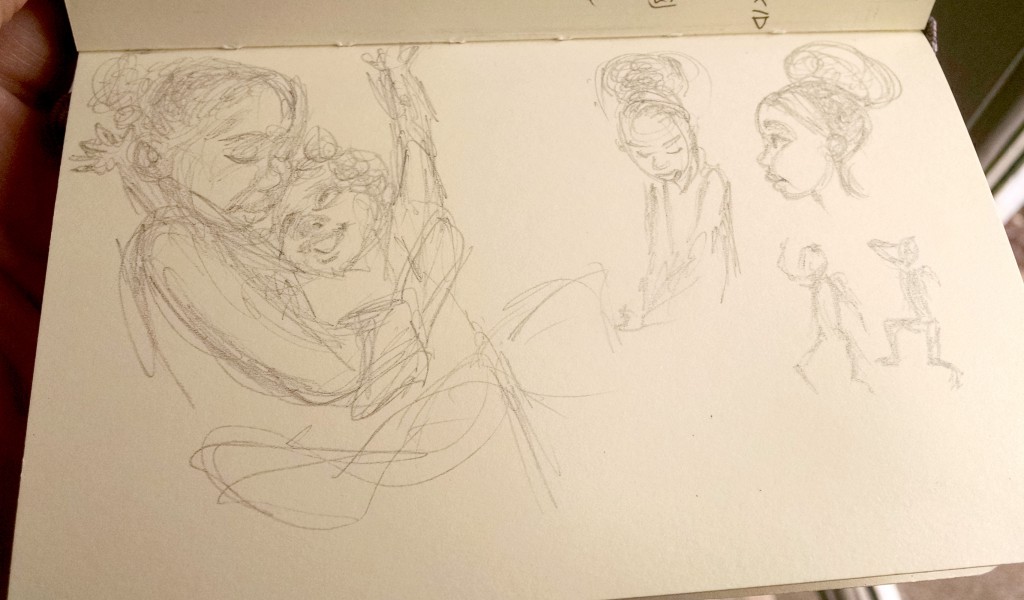 Terry: How did you choose the medium to illustrate the book in?

Nickie: Watercolor has been my preferred medium for a long time, so I knew it would be the one.

Terry: Would you say more about the illustration in which the older sister, Tayja, holds her sister Mia’s face and assures her they are real sisters.

Nickie: [Below] is an initial rough sketch showing the intimacy between the sisters in the context of the layout. I wanted to show their connection using the gutter of this spread, which also worked well as a cover. Cover in Progress 2 (above – first illustration) shows one of the four (!) attempts at painting this page. It is smaller on the front than the inside, so I knew I needed to paint it for the largest it appears. This one was challenging. I printed the drawing reversed and painted it that way in this sample. Although it isn’t the final one used, this technique sometimes helps artists get through a challenging painting. 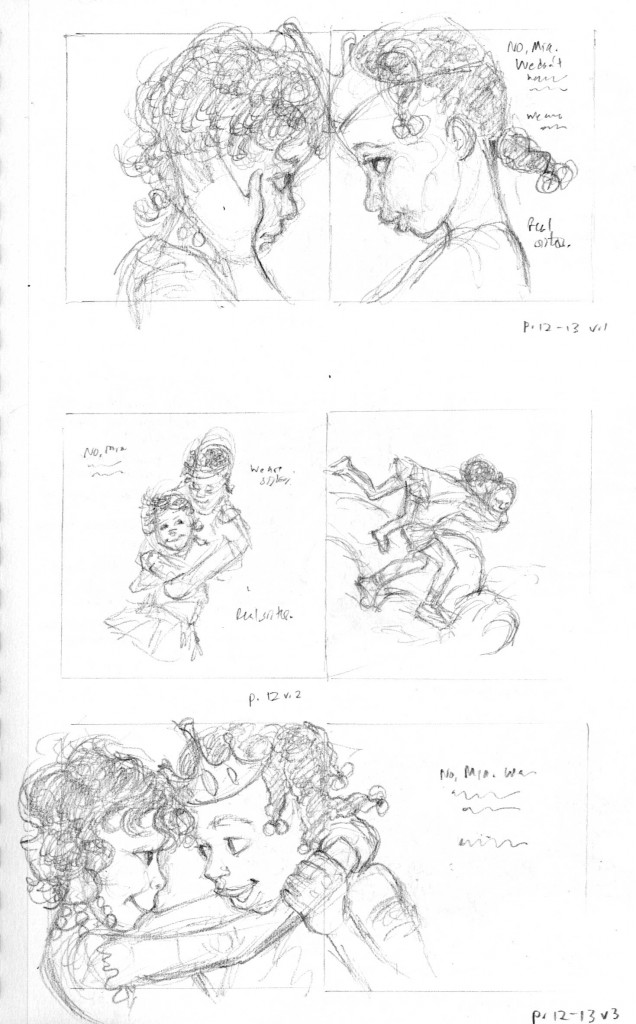 Thank you, Nickie! And here’s the final cover of REAL SISTERS PRETEND