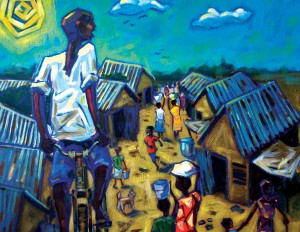 Kudos to the illustrators I’ve worked with on my 2016 picture books.  Ken Daley illustrated Joseph’s Big Ride. Kirkus wrote about the book, “A young refugee’s dream of riding a bicycle comes true at last when he arrives in America….A joyful, upbeat tale that takes a positive perspective on an immigrant child’s first encounters.” Ken’s vibrant art is joyful.

Luis Paints the World was inspired after seeing murals created in alleyways in Lawrence, 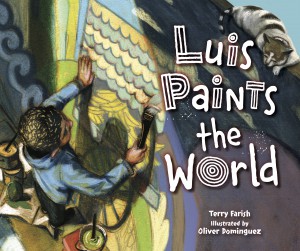 Massachusetts. Illustrator Oliver Dominguez painted the world on Luis’s alleyway as it had to be, “lush” and “dynamic” a reviewer said.

For more on these books and all my immigrant stories,  here’s my Newsletter, New Immigrant Stories 2016. 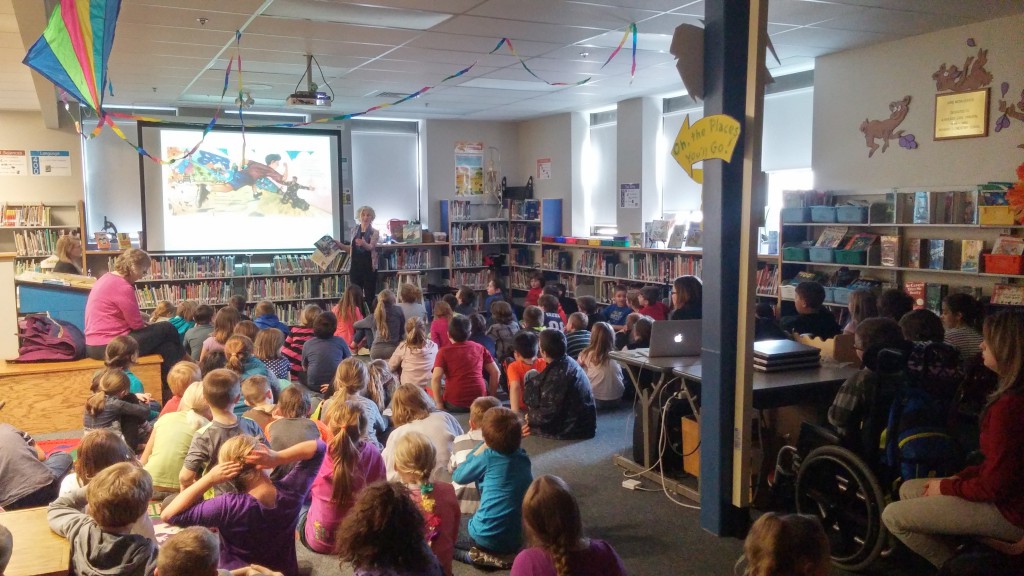 It was after this assembly program in Newport, New Hampshire that I needed to make flan. I had never made flan while I was writing LUIS PAINTS THE WORLD. In the story Luis’s mom makes flan the night before his older brother is deployed with his army unit. The story is set in a Dominican-American neighborhood where flan is a treat,  but these kids in Newport never had it.  Luis is sad as the story opens and runs from Nico, his brother, when Nico says he’s leaving.  One student asked me, Why did he run away? Another student told him,  He didn’t want to say good–bye.

That night I thought about the day.  I love it when students follow closely and add their interpretations.  I decided to make flan so I could tell students how long the mom had to stir.  I stood at my own stove and stirred the sugar like the mom in Oliver Dominguez’s illustration in our book. Sure enough, it turns to syrup. In the syrup you bake the sweet milk custard.

Later I got a note from one of the librarians who organized the school and public library event. She wrote:  “We were a little worried the anti-refugee/immigrant sentiment in parts of the town might surface in kids’ questions, but instead Luis and Nico showed the children that immigrants and immigrants’ children  are just like them: they have favorite foods, and miss their brothers, and need to run away sometimes, and need to show everyone that the world is at home, too. Thanks so much for that.”

Hoo- ray Luis and Nico could do that!

Now for the flan they love. It’s pretty good.  Here’s one recipe.  But if you have a family recipe for flan I sure would like to hear it. 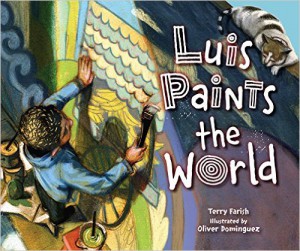 I signed my new Carolrhoda Picture Book, LUIS PAINTS THE WORLD at the Lerner Booth at the  the American Library Association conference in Boston.  I met librarians and writers from all the places I’ve lived as I signed LUIS,   illustrated by Oliver Dominguez.  My favorite thing to do was meet people who asked me to sign a book for a child not yet born.

Just in from ALA-Booklist for LUIS PAINTS THE WORLD: “The story is inspired by an art program in Lawrence, Massachusetts, a city of residents from all over the world, who share their stories and traditions through mural art. Its beautiful message will touch the hearts of readers and maybe inspire them to create art of their own.” 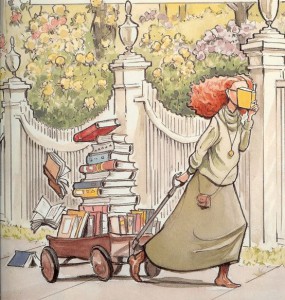 To the left is an illustration by David Small from Sarah Stewart’s book, The Library. I got some notecards with this illustration at the ALA conference this weekend in  Boston and it makes me feel like a kid and how easy it would be to slip into this person, walking while reading with a stash as back-up.  That was me.