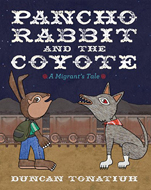 Congratulations to the winner of my first August Giveaway – Amazing Books to Help Students Meet New Americans. One Good Thing about America by Ruth Freeman goes to a teacher in New Hampshire.  This week, it’s a story of migrations for the youngest of readers,  Duncan Tonathiu’s Pancho Rabbit and the Coyote. It’s an award winning hardback picture book, perfect for libraries. I’m reposting my original review that appeared in The Pirate Tree, Social Justice and Children’s Literature.

Photo journalist Sebastiao Salgado documents the movement of millions of the worlds people across countries and continents in his book Migrations. In the 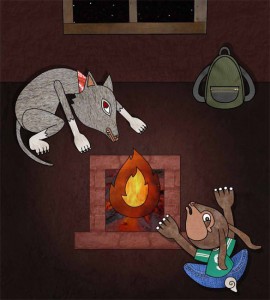 preface he writes about some things he came to believe after years of following and photographing people seeking a new home due to war and/or poverty. “More than ever, I feel that the human race is one,” he said and,  “When poverty becomes intolerable, people seek to move on.”  Mexican-American writer and artist Duncan Tonatiuh tells a tale of economic migration for the youngest of readers.  Pancho Rabbit and the Coyote: a Migrant’s Tale is the next in Tonatiuh’s tales about families separated by the journey from Mexico to El Norte.  In Dear Primo, a Letter to My Cousin, Tonatiuh creates a cousin in Mexico and a cousin in the U.S.  Pancho Rabbit is the tale of a son in a family of rabbits. His father doesn’t come home to Mexico when he’s expected after months of work in the U.S., and the son follows in his father’s footsteps, traveling north to find him.  Soon he is beholden to Coyote who promises safe travel if the rabbit-son will give him all the food he owns, one item at a time, as Coyote demands it.  Children will fear for this young rabbit especially in the scene in which the coyote is shown as a dark shadow and threatens to roast and eat him. Father and son are reunited, return home to their family, but imagine the next trip north “if there is no food or work…” and danger looms. The illustrations are profound in the telling of this tale. Tonatiuh describes his paintings “as inspired by ancient Mexican art, particularly that of the Mixtec codex.”  He notes that his work is hand drawn, then collaged digitally. They are unique in children’s book illustration and deeply honor the Mexican cultural traditions in art. Tonatiuh  bridges two cultures, having been born in Mexico City, and grown up in both the United States and San Miguel de Allende with a Mexican mom and an America dad. He offers an extensive author’s note and links to research sites on humanitarian issues around illegal immigration into the U.S.

Enter by commenting here. Comment on how you use the book.

2 thoughts on “August Giveaway – Pancho Rabbit and the Coyote”