For everybody celebrating the world’s events and joys and books that honor them, take a look at this magic created by Kirsten Cappy at Curious CityDPW. Curious City offers month-by-month book engagement programming kits, event kits, and book club and discussion guides.  Here!

Curious City honors World Refugee Day on June 20 with two of my favorite books to understand and welcome refugees, the YA novel in verse Something About America and the picture book, I’m New Here.

To celebrate National Library Week, you can play a scavenger hunt between chapters of Megan Frazer Blakemore’s Water Castle.

Do you want to celebrate National Cat Day?  Or International Tiger Day? You can with Raj the Bookstore Tiger.  Just like kids, the list shares both real-life struggles and delightful, giggling  whimsey.

Here is what I imagine.  Elsa Marston’s literary love affair with Lebanon and the Middle East might also have been about a love affair with her husband, Iliya Harik. He was from Lebanon and taught at Indiana University all their married life.  Elsa Marston has just died.  I can say she was my colleague, but I had only met her recently, in Mexico City, where I’d never been before.  Here’s an illustration from one of her books,  The Olive Tree, set in Lebanon during what Elsa calls “the troubles.” From her site I find that she refers to the Lebanese Civil War. 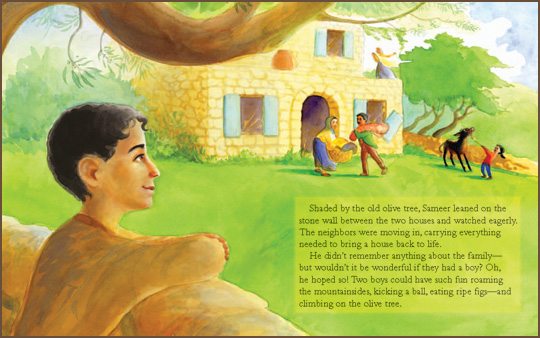 The illustration is by Claire Ewart.

Elsa writes, “Because the population of Lebanon includes large numbers of people from several different religious sects–Muslim, Christian, Druze, and others–the people have traditionally tried to share power in ways that reduced friction. From 1975 to 1991, however, Lebanon was torn by civil war, with fighting forces from many different groups within the country and from neighboring countries as well. The war intensified anxieties and anger, which led to violence and heartbreak. In some villages where people of different religions had lived together peaceably for generations, neighbors turned against neighbors. (And in some villages, the people refused to give in to fear and hatred.)

“I was in Lebanon at the outbreak of violence and again when things had more or less settled down. Of course I was deeply distressed by all that happened during those sixteen long years of destruction. But because I try, in my writing, to search for some signs of hope, I decided to write a story about people who are trying to find ways to get past their differences and their memories of hatred and anger. The result is this story, “The Olive Tree,” which I first wrote in 1994.”

Elsa wrote the award-winning collection,  Santa Clause in Baghdad. A film adaption of the title story by Raouf Zaki has been screened internationally and was just released to the public this year of her death.

When Elsa died, she must have been working on  “The Cows of Bayt Sahour” based on a true incident during the Palestinian uprising against Israeli military occupation, ’87-’92. Our mutual colleague, the powerful writer Nancy Bo Flood  ( Warriors in the Crossfire set on Saipan) and I both encouraged her to develop her long picture book text into a novel.

How strange and wonderful that Elsa’s and my paths crossed in Mexico. And how certain that, then, she and Nancy Bo Flood and I should create a program for IBBY on The Literature of Children and War, though Elsa had become too ill to present with us that year in New York City.  I hope  “The Cows of Bayt Sahour” remained her companion and I hope maybe her three sons will tell us if they brought the manuscript to Wisdom Tales who published many of her books.

With deep respect to you, Elsa, for your tales of a vision of peace.