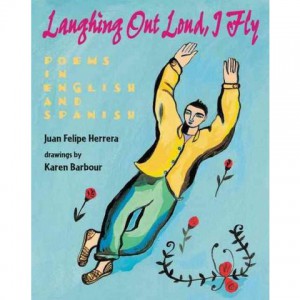 New U.S. Poet Laureate Juan Felipe Herrera, son of migrant workers, writes often about his child self and writes poems for children and teens.  In his preface to Laughing Out Loud, I Fly, he writes that when he was seventeen years old he discovered Picasso’s book of poems, Hunk of Skin and says he was “bathed in sunlight.” He said he was inspired by “Picasso’s love of seeing and hearing things differently.” And he sat at this brother-in-law’s table in San Jose and wrote this book.  Here are a few lines from “Went to the Marketplace & I Bought Beautifuls”

“I went to the marketplace & I bought beautifuls/ a swollen street pear, a starry nail/on this side of the corner, milk and slippery bread/and the afternoon light…”

He speaks for children growing up in two cultures through the creation of his characters in his picture books, novels and poems. And he takes great joy in sharing Mexican culture and the Spanish language, mixing cultures all up.

As poet laureate, Herrera has invited everybody – all of us, all our ages – to contribute to an epic poem about the American experience as part of his poetry project,  La Casa De Colores. The house of colors, he says, is “a house for all voices.”

Published by The Pirate Tree, Social Justice and Children’s Literature.

terryfarish Rabbit in the Moon Blog, Either the Beginning or the End of the World September 27, 2015March 18, 2016 0 Comment 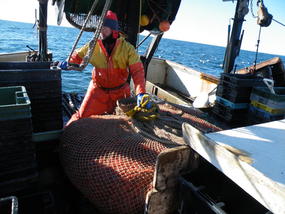 The Lowell Southeast Asian Water Festival, formerly Riverfest, happens every August on the Merrimack River in Lowell, Massachusetts. There’s everything Cambodia.  Music, dance, ginger trees to buy, golden bracelets, river boats,  lime papaya salad.  I went with our family friend who is also a photographer, Ty Paterson, and  she took these photos at the last celebration. She is also an interpreter of the Cambodian culture for me.