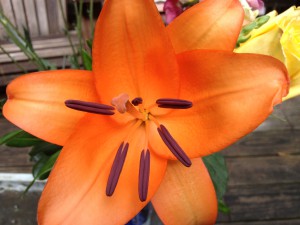 Students at the ESL Institute at the University of New Hampshire presented a conference on June 19 to recognize World Refugee Day.   ESL Lecturer Meaghan Dunn and her students had read The Good Braider and invited me to come and speak.  I did, and went early to see the students’ poster presentations. They each focused on a refugee group and told the story in images and words.  Some told of refugees coming to their home country. Students from Indonesia reported  the news-breaking story of Rohingya refugees from Myanmar that 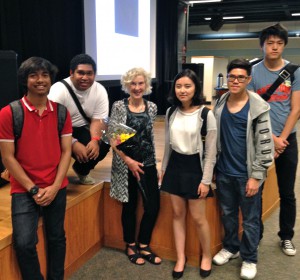 have been given haven in Indonesia.  Other students spoke about their own countries where people have been forced to escape.  A young woman from Iraq said she is here on a student visa. She hopes at the end of her education, she can return to her home.  I wish all the world could have heard these students speak.

After I spoke about the courage of a girl from Sudan, two students brought me an armful of flowers.  The stunning center flower was a tiger lily.  I found this about tiger lilies. “An Asian legend says a hermit once assisted a tiger by removing an arrow from its injured body, giving rise to a belief the tiger lily is symbolic of friendship.” Thank you, all the students and teachers at the ESL Institute.  I was your student.

ust pulled out one of Pam Wood’s  SALT magazine issues (Dec. 1988) and there is “Monica,” the stunning photo essay by Pam Berry. This essay took my breath when I first read it and does today on the day I hear SALT is closing. Monica is pictured on the cover of the issue. She’s pregnant, her hands dusted in flour cross above her belly. Her head is angled down, the photo ending just above her downcast eyes. SALT does not crop. Anyone at SALT would tell you. So we know the photographer framed the image of Monica in this dramatic way. I was always drawn to the documentary photography of SALT. But what took me to SALT were the first issues Pam Wood created with high school students in Cape Porpoise, Maine. I loved these stories. Pam was training these young writers to document the lives of fishermen in their town but she did it in a way that their work was more than documentation. Pam taught them how to tell stories about real people, how to capture their humor, how to let the reader see how to stitch a bait bag. I loved these articles and when I was writing a novel about a fisherman and his daughter, I found some of the SALT magazines and they gave me the jargon, the gear, the language. Later SALT become the Institute for Documentary Studies and moved to Portland. Pam and her staff then ran semester-long programs for college students. Pam ran an article written by one of her students about fishing years after the Cape Porpoise days, fishing while fisherman chaffed under tight “Days at Sea” regulations.

From the time I moved to the Seacoast, I’d begun work on that fisherman novel. My character, Johnny Grear, fished under every regulation as they grew more and more binding and every SALT story about fishing was part of my research even while I went with fishermen on their boats and collected my own oral histories. I loved the grit of the early SALT fishing stories and admired how real the young students made the fishermen, using the skills Pam gave them. As for my Johnny Grear and his daughter- all these years later, that novel, grounded in the hard life of fishing, will come out this fall, Either the Beginning or the End of the World.

I volunteered one year at SALT and met Pam Wood, but only a few times. I was proofing an issue of SALT that was on deadline. She was busy wrapping up a semester. Things were changing rapidly at SALT. The institute went through changes in administrations, had other directors. I had the great privilege of teaching writing there for a few semesters. I valued the documentary work produced by students in writing, photography, and radio. I learned vast amounts from writer Polly Bennell, Donna Galluzzo, Patricia Erikson, John Grady, Terry Coviello, and Sue Dion Robinson. I was star struck by Rob Rosenthal who was just beginning Salt Radio. Neal Menschel and Kate Philbrick were so laid back and seemed to produce their own extraordinary photographs with the ease of magicians. I yearned to be a SALT photography student just to listen to Kate’s wisdom and ease and Neil’s stories about shooting for the Christian Science Monitor and working with the reporter Scott Peterson. (Peterson’s Me Against My Brother introduced me to the war unfolding in Sudan.) Polly and I guided writing students who spent an entire semester researching one subject and writing in-depth New Yorker length non-fiction. Kate and I began our own project, documenting the lives of students from South Sudan. I wrote articles about refugees from South Sudan and much of my documentary work lead to writing my novel, The Good Braider. I remember every student and every story that was developed in our writing workshops. I know some of my students are still writing and producing radio pieces. Our workshops became close communities, and these were my favorite students I’ve ever taught.

My regret…. While I mentored students, I heard that Pam Wood was in Portland. Later she lived on nearby Peaks Island. My regret is that I did not see her again. She mentored me, unknowing. I read the stories she edited over and over. When I teach I still use a handbook she wrote on creating structure in a story and how to make transitions scene to scene. She is direct and clear in this handbook, as in all her writing. I regret not tracking her down on Peaks and listening to her story. Her vision was profound and I’m sad that SALT is closing. 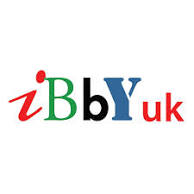 Excerpt from “Braids and Belonging”  my article  in IBBY LINK, Spring-Summer, 2015 the journal of  IBBY UK, International Board of Books for Young People in the United Kingdom.

“From the beginning of my years with the girls of Sudan, it was so much about hair. I saw how the styles were a vital part of their identity and a part of their sense of belonging within their community.   A young Sudanese man told me, “Only if a girl grows up in Africa does she know how to do the braids.” It was art to me as I watched the braiders’ fingers fly on the tiny strands of hair….