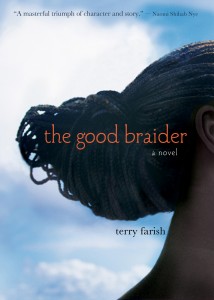 As I was writing The Good Braider, and as the story emerged in images told in spare language, I was not thinking of possible readers. I was looking for the key to capture the truth of the story. That way of homing in on a subject was what drew me to the specificity and spareness of poetry. I love what Rita Dove, a former U.S. poet laureate, said about verse novels during an Association of Writers and Writing Programs (AWP) Conference panel titled “Staggered Tellings: Immediacy, Intimacy, and Ellipses in the Verse Novel.” Verse novels, she said, offer “the weight of each word, the weight of the sentence, the weight of the line, the weight of white space, heightened attention to sound, and deep allegiance to silence.”

THE WORLD IN VERSE

Here are some books in verse for young adults that tell stories of new arrivals to the U.S. or explore the native countries of some who have left their homes.

Lai, Thanhha, Inside Out and Back Again
(HarperCollins, 2011)

Testa, Maria, Something About America
(Candlewick, 2005)