terryfarish Rabbit in the Moon Blog, Articles, Reading Lists January 11, 2012May 1, 2017Children's books about the U.S. in the Vietnam War, Vietnam War-Children's and YA literature 0 Comment

If You Knew Him, Please Write Me*

Novels provide clues for children and teens about the war in Vietnam.

*message  left beside a name on the Vietnam Memorial, Washington D.C.

THE RED CROSS recruited women on college campuses in 1968 to go to Vietnam, and I did a tour in Cu Chi and Qhi Nhon, 1969-70. The war still belongs to me as it belongs to everyone else it touched.  When I became a children’s librarian, I started watching how writers approached the war in children’s and young adult books.

They reveal who carried the burden of combat.  In Bobbie Ann Mason’s In Country (Harper, 1986) Sam’s mother tells her, “when you get to [the Vietnam memorial], you look at the names. You’ll see all those country names, I bet you anything. Bobby Gene and Freddie Ray and Jimmy Bob Calhoun…You look at those names and tell me if they’re not mostly country boy names.” Charlie Pippin (Macmillan, 1987) by Candy Dawson Boyd attempts to explore how too many blacks had to fight that war.

The children of the 2,700,000 American men and women who served in Vietnam are now touched by Vietnam. Children and young adults ask what happened and face some incomprehensible answers. Sam, in In Country, keeps asking Tom, a veteran:

“I want to know what it was like there. I can’t really

imagine it. Can you tell me what it was like?”

“Did you see palm trees?”

“Yeah, they had palm trees over there. At least they did

before we napalmed and defoliated them…Look, Sam.

It’s hard to talk about. And some people want to

protect you, you know. They don’t want to dump all

this stuff on you.”

The Vietnam Memorial, which veterans call “the wall” is a powerful symbol used in many novels. It wrenches and affirms.  It unites children with their fathers.

Unlike most novels that end at the wall, Park’s Quest (Dutton, 1988) by Katherine Paterson begins there. The wall sustains Park’s search. What he finds is the gem of the book, a girl named Thanh. The summer after the wall is dedicated, Park meets his father’s family for the first time. He meets Frank, an uncle he didn’t know he had, and Thanh, a belligerent Amerasian girl. Frank is married to a Vietnamese woman, Thanh’s mother. Thanh bosses and taunts Park.  Thanh is a survivor of war and refugee camps. She’s tough and not about to give up Frank to this new kid, Park, or to the baby that her mother is about to have. Readers learn these details along with Park as the situation unfolds. On the back cover of Park’s Quest is a black-and-white photo of Park’s father in uniform. Readers are often drawn to the photo when Park recalls it. Park finds the clue to Thanh’s identity in another photo of his father he sees in Thanh’s room:

He stared into the little brown face, the bright, mischievous

“You can ask Frank,”[he tells her] “but I’m sure we have the same father.”

Park, Becca Silverman in Caribou (Greenwillow, 1984) by Meg Wolitzer, Charlie Pippin, and Ellie Farley in Cynthia Rylant’s A Blue–eyed Daisy (Bradbury, 1985) are all 11 years old. Their problems and their perspectives, though, are very different.

Becca, in Caribou, has one of the most appealing and compelling voices in all of these books as Wolitzer recreates the year 1970 for contemporary readers. Becca’s family, including her 19-year old brother, Stevie, gather around the black-and-white TV to watch the lottery draft.  The first birthday that he calls, the birthday of the guys surest to be drafted for Vietnam, is Stevie’s. Becca says, “I froze there on the floor. We all froze, like we were having our family picture taken. In that one second everything changed. Just because my brother was born on a particular day during a heat wave a long time ago.” Stevie says, “I don’t want to learn to use a gun. I have enough trouble with the Dairy Queen machine.”

This is a novel about best friends and loving a brother and popularity. But within this framework, Stevie takes a Greyhound bus to Montreal, and one day Becca doesn’t stand up for the Pledge of Allegiance. “Nothing much happened,” Becca says about the year that she was in the sixth grade. She and Stevie were just living their lives and making history.

Boyd’s unwillingness to let characters realistically just live their lives in the main problem with Charlie Pippin. Charlie’s family is black. The book avoids any tinge of black stereotyping but creates a predictable vegetarian-pacifist type. Vets speak in simplistic language, and Charlie, sweet and hard working and innocent, remains that way, even as a ranger makes rubbings for her at the Vietnam Memorial. The book faithfully represents Charlie’s diligent research on Vietnam through the World Book and National Geographic.  But it misses the magic of fiction and discovery.

In the night he made fudge in the skillet the way

he used to and poured it into a buttered plate to cool.

They all sat around the kitchen table, talking. Okey would

It’s the silence that effects Ellie and other main characters. It forces them to confront or withdraw from the silence.

Marcie, the main character in Judie Wolkoff’s novel Where the Elf Kin Sings (Bradbury, 1980) and Marcie’s family get to the bottom of her alcoholic father’s problems with the help of a veterans’ counselor. She hears about the horrors of war. This is a detailed story of a combat veteran’s crooked path to recovery through his daughter’s eyes. The tone and mood are serious throughout.

The first-person narrator of Walter Dean Myers’ Fallen Angels (Scholastic, 1988) Richard Perry, is 17 and looking for a better life than he has in Harlem. Perry’s telling is intimate and close, as if the reader were Perry’s friend and someone to whom he wanted to tell the truth. The tension in the firefight scenes is intense and prolonged, and readers feel that they are in the hands of a powerfully good storyteller. Myers’ characters aren’t cynical; there is prayer and brotherhood and they don’t do drugs. With the soul-searching, comradeship, and courage of Perry’s platoon, Fallen Angels comes closer to creating Vietnam war heroes than other books on the war.

In a night mission, Perry and Peewee are separated from their platoon and surrounded by Vietcong. Perry says:

“Let’s just keep quiet and shoot the shit out of

anything that come near us.”

I touched the safety. Changed the clips. I put a

frag grenade in front of me…

Peewee put his hand on my wrist.

“Nothing,” he whispered back.

He kept his hand on my wrist. I moved

my hand and took his. We held hands in the

Some teens are getting other accounts of the war from books for adults.  In Country is an adult novel with a 17-year old protagonist who is watching for signs of Agent Orange in her uncle, loving another vet, and looking for clues about her father who never came back.  It’s been viewed almost equally as a young adult novel.

In Tim O’Brien’s personal narrative, If I Die in a Combat Zone (Dell, 1987), a 1973 ALA Best Book for Young Adults, readers get a process of thinking out of a draftee’s options from college to boot camp to a combat assault.  A buddy and he hash and rehash arguments about their duty to this war.  “Here were are. Mama has been kissed goodbye, we’ve grabbed our rifles, we’re ready for extinction. All this not for ideology, rather it’s from fear of society.” O’Brien went, in the end, as a foot soldier, and his book stops being about ideology.  It becomes a book about courage in scenes as visual and full of stink and sound as its descendent, the film “Platoon.” O’Brien hauls his readers in beside him and forces the question, of males and females, what kind of a human being would I be in combat?

A Piece of My Heart (Presidio, 1986) by Keith Walker and In the Combat Zone (Little, 1987) by Kathryn Marshall are two other adult books of interest to young adults. They are oral histories of young women  who served as nurses, refugee workers, Red Cross workers, USO staff, and entertainers in Vietnam.

Letters are a common device in these books to reveal fathers and brothers and sons separated from their homes. The books themselves can be seen as letters – attempts to communicate and help children and teenagers understand. 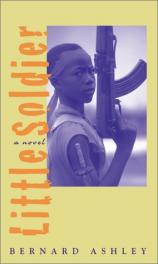 “In what language is this holy? ” Naomi Shihab Nye writes in her poem “All Things Not Considered.”  Children of War is my reading essay featured in School Library Journal  about novels, poems, and memoir for young people on war, including Nye’s 19 Varieties of Gazelle.